The Sacrament of Holy Baptism was instituted by Our Lord after His resurrection, when He appeared to His disciples and said, All authority in heaven and on earth has been given to Me. Go therefore and make disciples of all nations, baptizing them in the Name of the Father and of the Son and of the Holy Spirit, teaching them to observe all that I have commanded you; and lo, I am with you always, to the close of the age (Matt. 28:18-20). The necessity of this baptism was further stressed by the Savior when He said to them, He who believes and is baptized will be saved; but he who does not believe will be condemned (Mark 16:16).

On the day of Holy Pentecost, the Holy Apostles were themselves baptized by the Holy Spirit in the form of tongues of fire and began to administer the Sacrament of Baptism themselves to all who believed in Christ, wanted to repent and to change their life in accordance with His teaching. And Peter said to [the people], 'Repent, and be baptized every one of you in the Name of Jesus Christ for the forgiveness of your sins; and you shall receive the gift of the Holy Spirit'. So those who received his word were baptized, and there were added tha

According to the Holy Apostle Paul, if anyone is in Christ, he is a new creature (2 Cor. 5:17) and thus the regeneration of man's personality begins with the Sacrament of Baptism. As Scripture says, as many of you as were baptized into Christ have put on Christ (Gal. 3:27) and these words show that in Baptism the believer is united with Christ, a member of Christ's Church and through the Sacrament of the Holy Eucharist becomes a partaker of the Divine Nature in spirit and body. In Baptism a new element a supernatural one which remains hidden and acts secretly is poured in and the newly-illumined receives a new name. Through this essential change in his human nature, he turns into a new creature.

This essential change in man's nature takes place through the free and moral participation of man himself and only on this condition is sin abolished in man in the Sacrament of Baptism. The dominion of sin over the power of the soul loses its strength in Baptism: It is Christ Who now dominates. But the element of sin still remains before the conscience as a seductive principle. That is why it is necessary for man to perfect himself morally even after Baptism; there is still the possibility of his fall. In Baptism man is given the power to struggle with sin and he faces the task of translating into life the Gifts of Grace of the Holy Spirit given to him in this Sacrament.

The Savior commanded His disciples to teach the Faith and to baptize all nations (Matt. 28:19), for as descendants of Adam all are in need of rebirth. This rebirth is accomplished only through Baptism, which is why all men seeking salvation, regardless of sex, nationality, or any other condition, must be baptized. Thus the Orthodox Church holds Baptism to be as necessary for infants as for adults, since they, too, are subject to Original Sin and without Baptism cannot be absolved of this sin.

In the Old Testament, circumcision was the prototype of the Sacrament of Baptism in the New Testament, by which the believer enters into a new covenant with God (Col. 2:11-12). If circumcision was performed in the Old Testament on all males, adult and infant (being prescribed for infants on the 8th Day after birth), so much the more, according to the grace of the new covenant, the Sacrament of Baptism should be administered to infants. Having become a member of the Church through Baptism, infants can receive Holy Communion and from the first days of their life on Earth, they can become vessels of the Holy Spirit. Holy Scripture itself speaks of the baptism of whole families by the Apostles (Acts 16:14-15; 30-39; 1 Cor. 1:16), and there is no reason to consider that there were only adults in these families or to assume that when adults were baptized, the children in these families were not baptized. Christianity, above all, is a new life in Christ Jesus, and this life, according to the belief of the Orthodox Church, is given to all, and of course to children, for as the Lord Himself said, Let the children come to Me, and do not hinder them; for to such belongs the Kingdom of Heaven (Matt. 19:14).

As St. Paul says, we are called upon to confess one Lord, one Faith, one Baptism (Eph. 4:5). The Church teaches one Baptism because rebirth through grace experienced by man in this Sacrament is one and unrepeatable, just as one and unrepeatable is our natural birth, our death and the Resurrection of Christ. Baptism was, however, repeated, and still is, in cases where the first Baptism was administered incorrectly not in the Name of the Holy Trinity and not according to the way instituted by Our Lord.

The Baptism of both adults and children takes place in the presence of sponsors, who act as guarantors for the one being baptized. Only one sponsor is actually necessary, although there are usually two (or more). According to Church tradition, the sponsor for a male is a male and for a female is a female. The sponsor(s) are responsible for following after the spiritual and religious upbringing of the child, for which reason it is absolutely necessary for the sponsor in question to be Orthodox.

In earlier times, Baptism was done, on occasion, on the 8th Day after birth and (in Russian practice, at least) the child was given the name of that Saint whose feast was on the 8th Day, for it was usually the day of spiritual, not physical, birth that was celebrated. In modern practice, the Baptism is usually administered on or after the 40th Day after birth, the day of Churching, although we do note that in ancient times the Baptism and the Churching were administered separately. The custom of Churching is connected with Old Testament rites and, in particular, with the life of Christ when, on the 40th Day, He was brought by His parents to the Temple, fulfilling the terms of the Jewish Law.

1. The Catechumenate, which takes place through the Priest's breathing on the one to be baptized, accompanied by the Sign of the Cross and the laying-on of hands upon his head, as well as a prayer to expel from him the ancient deception and that he be united to the flock of the Church.

2. The Exorcism, which consists of four prayers, commanding the Devil and the powers of darkness to depart from the one to be baptized, as well as entreating that a Guardian Angel be given to aid him.

3. The Renunciation of the Devil, in which the catechumen, along with his sponsor(s) turns to the west, which personifies the region where in the powers of darkness abide, and renounces Satan and all his works, breathing and spitting on him as a sign of this renunciation. The catechumen then turns back to the east (which symbolizes the region wherein Light resides) and declares himself ready to unite himself to Christ.

4. The Adherence to Christ, in which the catechumen, three times, declares that he unites himself to Christ.

5. The Recitation of the Symbol of Faith, wherein the catechumen bears witness to his readiness to unite himself to Christ, after which he adores the Holy Trinity Father, Son and Holy Spirit in confessing the essence of the Faith.

This preparatory part leads to the Sacrament of Holy Baptism itself, which begins with the same exclamation by the Priest as at the Divine Liturgy: Blessed is the Kingdom of the Father, and of the Son, and of the Holy Spirit... after which follows:

1. The Great Litany and

3. The Unction With Oil. The Priest now anoints, according to ancient custom, the body of him to be baptized with the Oil of Gladness, after which there takes place

4. The Triple Immersion in Water. According to the meaning of the ancient practice, absolutely there is required immersion in water and not sprinkling (or even pouring). Immersion in water signifies dying to sin and coming up out of the water signifies a resurrection for a new life in Christ, something that the Baptismal Epistle reading speaks of clearly. The obligatory formula in so doing is the recitation of the Name of the Holy Trinity: In the Name of the Father, and of the Son, and of the Holy Spirit, just as was commanded the Apostles by the Lord Jesus Christ.

5. Psalm 31 is read after the Immersion in Water.

6. The Vesting. The newly-illumined one is now vested in white garments and a cross is given to him.

Holy Baptism is the only Sacrament which, in extreme cases, a layman can also perform (both a man or a woman). The only requirements are that the one baptizing must be an Orthodox Christian and the Baptism must be done by immersion, if possible, according to the following formula: The servant (or handmaid) of God [Name] is baptized in the Name of the Father, Amen, of the Son, Amen, and of the Holy Spirit, Amen. If the one being baptized in such a case were dying and later recovered, the Sacrament must be supplemented according the Church Order, i.e., the Priest must read the corresponding prayers of the Sacrament and administer the Sacrament of Holy Chrismation. 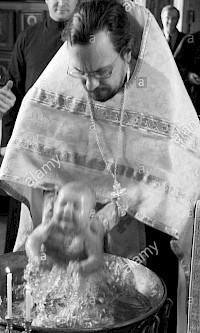