Cathedral Gardens Cemetery for the Orthodox was founded in 1926 and comprises approximately 56 acres located in Howard County, Maryland. The burial area has 10 acres of land. The grounds also include Saints Peter & Paul Chapel and a large picnic area. Liturgies and other services are held at the chapel and listed on the church schedule. Often picnics are scheduled after services where food is available for purchase. 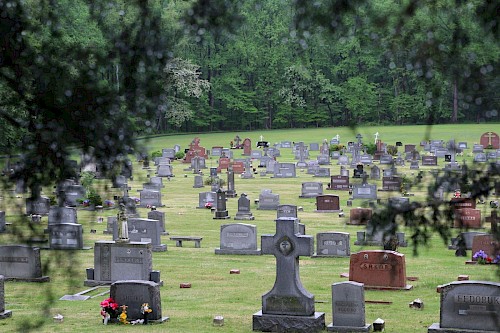 A Guide to an Orthodox Christian Burial 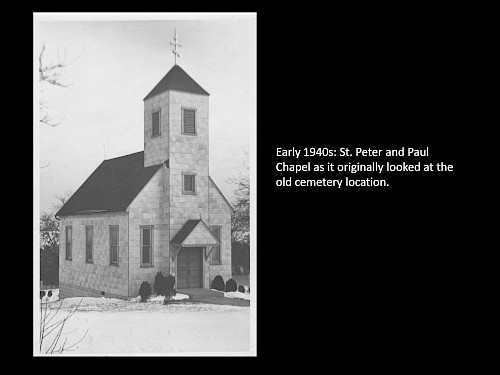 Parish records show that discussion on purchasing land for a parish cemetery began as early as July 1919 and a committee was formally established in March 1923 for this task. In February 1926, approximately a 50-acre was purchased in Anne Arundel County for $6,500.00. The property included a house for a caretaker and was further developed by the parish for use as both a cemetery and a picnic location away from the hustle and bustle of busy city life. Initially, cemetery lots were sold for only $25 each! A bus service was run from Baltimore to the cemetery on days during the spring and summer months when liturgical services and picnics were held at the cemetery.

In 1939 the Holy Trinity Church parishioners decided to construct a chapel at the cemetery. The Saints Peter and Paul chapel was built out of wood, covered with sandy-colored asbestos siding and had a roof with red asphalt shingles. The chapel construction cost $2,335, with two-thirds of the money raised prior to its construction. A bell for the chapel was donated in 1940 by Mr. & Mrs. Menchenko. The chapel was consecrated 14 July 1940 by Bishop Benjamin (Fedchenkov).

In 1947, Baltimore City decided to build a new modern airport. It chose 3,000 acres of land in Anne Arundel County along the newly built Baltimore Washington Parkway that connected Baltimore with the nation’s capital. Holy Trinity Cemetery happened to be located on this 3,000-acre plot of land and our cemetery property was condemned and purchased by the city for the building of Friendship Airport (BWI Airport). This wasn’t the first time that the cemetery property has been impacted by the local government. In 1933, the Anne Arundel District Management ran a state road through the cemetery for the benefit of the local farmers. We received over $45,000.00 for this property and the city agreed to cover expenses to disinter and move the graves and monuments to a new cemetery location. The former cemetery property has since been reforested and is located behind the Northrop Grumman facility nested between the two north-west facing airport runways.

The search began for a new cemetery property, which lead to a 71-acre estate located in Elkridge, Maryland. In the early 1900’s, the “Elibank” estate began work on creating a beautiful outdoor garden and cathedral using trees, shrubs, and landscaping. The property became known as Cathedral Gardens. In 1940, the mansion on the estate burned down and the property remained vacant. In August of 1947, Holy Trinity Church purchased this tract of land for $23,000.00 with additional expenses for landscaping, surveying, relocating the Chapel, and building a road to the Chapel. The chapel was transported by road to Cathedral Gardens and placed where the Elibank estate mansion once stood. Ten acres of land to the east of the chapel were leveled and the cemetery section was created. The outdoor cathedral garden was located to the west of the chapel and remains of the stone steps to the chapel, the nave, and the narthex can be seen to this day. The picnic grounds and the caretaker’s house were located further beyond the outdoor cathedral. During the fall of 1949, all graves were recommitted to our new cemetery.

In 1958, Holy Trinity Church was informed of a new road being proposed to run through the cemetery. Because of the new Interstate Highway 95, ten acres of the cemetery were condemned by the State of Maryland. We received $17,000.00 for the lost property. Through the efforts of Anatoly Uchuck, in 1961 the Perpetual Care Fund for the cemetery at Cathedral Gardens was started. The picnic area was enhanced with a new pavilion in 1962.

A period followed where the Holy Trinity Cemetery experienced waning use. Previously in the 1950’s, there were monthly church services and picnics held on Sundays. A bus would take dozens of parishioners from Holy Trinity Church in the city to Cathedral Gardens in Elkridge for a day in the country. By the 1970’s, the enjoyment of a day in the country was replaced with weeklong vacations in a growing variety of summer vacation locations in the mid-Atlantic region. As a result, fewer people came for Sunday picnics. The bus service from the church in the city was discontinued. The property became underutilized. Vandals took their toll on the chapel and many of the religious icons and artifacts were removed; only the two large icons of Saints Peter and Paul remained. Eventually the two existing pavilions became old, worn, and were taken down.

A resurgence of interest during the 1990’s resulted in a return to monthly picnics. In 1992, the cemetery farm house was demolished and trash that was illegally dumped during the previous decade was cleaned up. In 1995 the chapel received a new roof and cedar clapboard for the steeple.

In 2001, at the urging of Fr. Michael Clancy and the Parish Council, Fr. John Vass started a Russian-speaking filial mission to hold Slavonic liturgies at the Saints Peter and Paul chapel. The first year at the mission was a labor of love and some Sundays would have only one or two families attending Divine Liturgy. But through the prayers and efforts of many, the mission community grew. For more than two years, the parish held services at the main church on Fairmount Avenue in English, with Fr. Michael presiding, while Fr. John would conduct services at the cemetery chapel in Russian. The two communities would come together for Pascha and other holy days as well as summer picnics at the cemetery. Also, during this time, the parish invested considerably in renovating the chapel. The entire interior was refurbished, complete with a marble tile floor and a new iconostasis. In addition, a new permanent outdoor pavilion was built at our picnic grounds. Storage buildings were added in early 2002 and a playground for the children. The pavilion was dedicated, and the newly installed iconostasis in the chapel was blessed on 14 July 2002 by Bishop Mercurius (Ivanov). The filial mission was later integrated into the Holy Trinity parish in 2004, adding to the size and diversity of the parish. 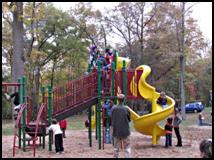 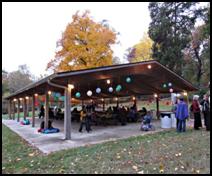 Questions and Answers About Cathedral Gardens

When are the gates open?
The gates are kept locked. Contact the Cemetery Manager to find out how you may gain access.

Are there telephone numbers I can call?
Call the Cathedral Gardens Manager at 410-666-2870, mcmickel@verizon.net. The Manager has information about purchase of burial lots.

What happened to the Divine Liturgy in Slavonic that was being held each Sunday morning in the chapel?
Right now, we do not have enough priests to continue regular services at the Chapel. If you know of someone who needs a priest who speaks Russian, have them call Father John Vass at (410) 997-0802.

Do you have sports equipment?
We have a variety of softball, basketball, soccer, horseshoes, and other equipment. We do not always remember to bring it out. Please ask for it! The permanently installed playground equipment, such as slide and swings, is always available.

What are the procedures for placing of monuments and other stonework?
You need a permit from the Cathedral Gardens Manager for installing or removing monuments, footstones, vases, or other stonework. We have designated one company to prepare the bases for these items. Our present policy is that you can contract with any company to install the monument or other stonework on the bases. Footstones and vases must be placed at ground level except those erected prior to 1981.

Who is responsible for maintaining monuments and other stonework?
You and your family are responsible. The only responsibility of Cathedral Garden's management is mowing the grassy areas that may be reached by mechanical equipment. However, we do care about the stonework. If something is keeping you from maintaining your family plot, please talk to us. We may be able to help.

Do I have to know the number of my lot?
Not totaly, however, knowing your lot number will make procedures go smoother. The lots start with burial lot number one near the chapel and the numbers increase as you go downhill. Five foot wide paths and nine foot wide lanes alternate, going across the paved loop. We can help you find your number during any of the picnics.

Who broke the stone vase at my monument?
Nobody did. It is good if vases have a drain hole. If this hole becomes clogged, freezing water tends to break the vase.

How can I find out what the weather at Cathedral Gardens is this very hour?
The Maryland Highway Commission has an automatic weather recording device a few hundred yards from Cathedral Gardens. 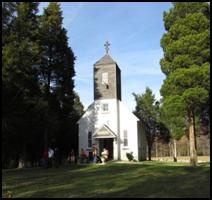 The Manager has information about purchase of burial lots. Contact us > >