The Feast of Feasts the Holy Pascha the Resurrection of the Lord-is the climax of the Church's liturgical year and is also the most glorious, most joyful and bright festival of the Christian Church. On it Our Lord and Savior Jesus Christ arose as victor over death, destroying the power of death over man once and for all and annulling the curse pronounced upon man in Paradise. But, before the bright joy of Pascha, the Church has ordained a lengthy period of repentance and spiritual searching a period of preparation, so to speak the 40-day Great Lent.

The Forty Days of Great Lent commemorates Israel's forty years of wandering in the Wilderness the forty years of painful struggle as Israel longed for and then received entrance into the Promised Land (Ex. 16:35) Moses remained fasting on Mt. Sinai for forty days (Ex. 34:28) and the Prophet Elijah fasted for forty days as he journeyed to Mt. Horeb (1 Kings 19:8). Great Lent also recalls the forty days the Lord spent in the Wilderness after His Baptism, when He contended with Satan, the Temptor.

The time of Great Lent encompasses forty days, to which must be added Lazarus Saturday, Palm Sunday and Passion Week. In addition, the Holy Church prescribed three weeks of preparation for the Great Lent itself the Sundays of the Publican and the Pharisee, Prodigal Son, Meatfare and Cheesefare. In all, the Orthodox Church prescribes ten weeks of spiritual and bodily preparation for the joyous Pascha of the Lord.

The Descent of the Holy Spirit (50th day after Pascha)

On the 50th Day after Pascha, the Holy Church celebrates the Feast of the Descent of the Holy Spirit (Holy Pentecost). When the Day of Pentecost had come, they were all together in one place. And suddenly a sound came from heaven like the rush of a mighty wind, and it filled all the house where they were sitting. And there appeared to them tongues as of fire, distributed and resting on each one of them. And they were all filled with the Holy Spirit and began to speak in other tongues, as the Spirit gave them utterance (Acts 2:1-4).

From the 4th Century on, the Church of Rome has celebrated the Feast of the Holy Apostles on June 29 / July 12. This became the usage of the Universal Church. Spiritually the Feast is linked with Holy Pentecost, as the witness of the Apostles is the immediate fruit of the descent of the Holy Spirit which came upon them. The Feast is preceded by the Fast of the Holy Apostles which begins on the Monday following All-Saints' Sunday (1st after Pentecost). The two most important Apostles of the early Church were Peter and Paul and, according to Church Tradition, they were both martyred in Rome, Paul by beheading and Peter by crucifixion. Thus this Feast became especially prominent in Rome.

Although St. Peter had a special zeal concerning Christ and is considered the chief of the Apostles, he did not have any special authority over the other Apostles, but was only first in honor. When there were important questions in the Church, it was a Church council that decided them, and St. Peter himself was sent by a council to preach the Word of God.

Liturgically, the most important Feast of the Theotokos is that of her Dormition or Falling-Asleep. Prior to this Feast there is a strict two-week fast, beginning on August 1, which is broken only by the Feast of the Transfiguration on August 6. This Feast possesses two distinct aspects inseparably linked in the mind of the believer. On the one hand, there is death and burial and, on the other, resurrection and the assumption of the Mother of God. As part of the Inner Tradition of the Church, this event was mystery that was not designed for the ears of the outside world, but which was revealed to the faithful within the Church.

Lives of the Saints / Other Feast Days 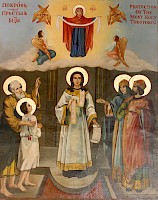 A major cycle which involves the entire life of an Orthodox Christian is the daily cycle of prayers and praises offered by the Church, once every twenty-four hours. These services express our remembrance of events which happened at certain hours and contain petitions relevant to these memories.

Following this ancient pattern, Orthodox Christians begin each portion of the day with common prayer, which has resulted in the following eight Services, customarily divided into three groups: Ninth Hour, Vespers, and Compline; Nocturns (Midnight Service), Matins, and First Hour; Third and Sixth Hours. In addition to this daily pattern, in certain monasteries during certain periods of fasting, each of the Hours is followed by an intermediate Office called the Interhour. Also included in the daily cycle are the Offices for the Blessing of the Table and the Morning and Evening Prayers.

The Daily Cycle follows this pattern:

The services of the Daily Cycle are usually contained in a bound collection called the Book of Hours, also known as the Horologion (Greek) or Chasoslov (Slavonic). 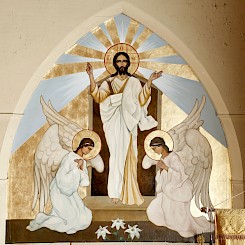 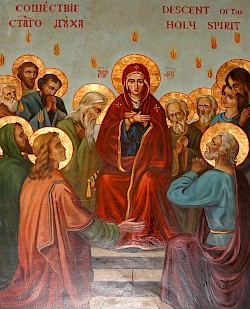 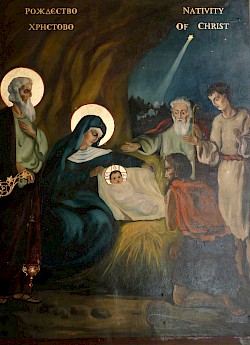